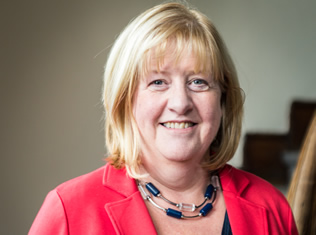 Gay is a Chartered Work and Organisational Psychologist and an Executive, Business and Team Coach. She has a deep commitment to working with clients to release their potential in order to get sustainable results. She joined the DCU Educational Trust Council of Trustees in 2012.

An experienced HR professional, Gay has enjoyed a distinguished career working as a consultant specialising in areas such as leadership development, change management and performance management. She has lectured in Strategic HRM and has worked with private and public sector organisations in Ireland and the UK. She was a founder member of the Association for Coaching in Ireland and served on the Board for five years.  She is a Fellow and board member of the Irish Institute of Training and Development and is a Fellow of the Institute of Banking. Gay has an MSc in Organisational Psychology from Birkbeck, University of London.

Gay White graduated from DCU in 2001 with a BA in Humanities, which she completed as a part time student through Oscail. She joined the Alumni Council in 2010 and served as chairperson from 2012 to 2016. Gay is a member of the DCU Leadership Circle and has taken an active part in the DCU Mentorship Programme over the past few years.

Gay is a supporter of all DCU Campaign projects. There are many that she feels passionate about, however, the one that she is most passionate about is the Access Programme. She says that, “Given the geographical location of DCU, this programme plays a vital role in offering the gift of education to a population that otherwise would miss out.  Education can be described as the gift that keeps on giving and DCU has the biggest Access programme in Ireland. The academic achievement of these students – who receive support on many levels, speaks for itself as there are more students in this group who achieve first class honours than in the general population.”

In her spare time Gay enjoys painting, music and walking in nature.