Dublin City University has raised €75 million since the launch of it Shaping the Future capital campaign in October 2015 to raise funds to support a range of inspiring university projects.

The money raised in the ambitious fundraising drive has enabled the university to address major contemporary issues, such as tackling global challenges of providing clean water through research at DCU’s Water Institute, to the designation of DCU as the world’s first Autism-Friendly University.

The success of the campaign has also transformed the student experience at DCU through the development The U, DCU’s state-of-the-art student centre which opened in 2018, and improved equality of access to higher education through support for DCU’s Access Programme.

Led by the DCU Educational Trust, the campaign is on course to meet its target of raising €100m by 2021.

Significant Shaping the Future projects include:

“The success of the campaign has been hugely uplifting. Supporters of the University, who have been inspired by the campaign projects and DCU’s track record of innovation and delivery, have invested in us but also in the future of Ireland. The impact of this investment will be felt for many decades to come.”

“The Educational Trust would like to thank all of our donors who have supported us to date in reaching this important campaign milestone. We are well positioned to reach our ambitious target of €100 million by 2021 and will continue to strengthen and build on our existing relationships and look to establish new partnerships in order to meet this goal.” 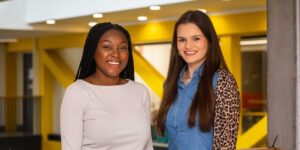