What inspires Bank of Ireland to support sport at DCU?

GH: “Our partnership with DCU through the DCU Bank of Ireland Sports Academy represents many of Bank of Ireland’s core values from our community focus to the fact that we like to excel at everything that we do.

It very much ties in with our motto: “For small steps, for big steps, for life.” We have branches in 250 communities throughout Ireland where we are committed to getting involved at the earliest stage from primary school right through university as well as being part of the fabric of our communities through engagement with local enterprise. We want to be a part of what success looks like at every stage in Irish life.

Our support for students and elite athletes at an early stage in their careers epitomises our commitment to excellence and success – but we don’t just want to support people that are already successful – we want to join them on their journey and help them to develop from day one with support from Bank of Ireland.

The students that join the Sports Academy are drawn from communities throughout Ireland. They will have excelled locally but coming to DCU brings them together with like-minded individuals and a centre of excellence to take them to another level.”

DK: “It’s also not just about what it means to the athletes supported by the Sports Academy. It’s also about what they can bring back to their communities when they leave DCU.

The Sports Academy is also just one of the many ways in which we are supporting students in DCU. The old ways of banking are long gone and we like to think of our branch as more of a community space today that is available for students to use. Whilst the construction of the new DCU Student Centre is underway, also with support from Bank of Ireland, we are encouraging the Students’ Union and clubs and societies to use our board room for their meetings….and we even throw in some free coffee and food to go with it! I feel like I’m always stocking the fridge!”

The Academy has grown significantly since 2006 with support from Bank of Ireland, from 30 GAA players to 210 elite athletes today with a prestigious list of alumni featuring Olympians and All-Ireland winners. Are there any Sports Academy athletes past or present whose journey you have followed with particular interest?

GH: “I have been following sport for my entire life and there is probably one Sports Academy graduate who stands out for me and that is Stephen Cluxton. He is possibly the greatest goalkeeper of all time who has pretty much reinvented the goalkeeping position.

There are a few other players who I would follow with particular interest. A number of past Sports Academy athletes have actually since come to work with us in Bank of Ireland as brand ambassadors or staff members such as Shane Carthy, John Small, Denis Bastick and Paddy Andrews from the Dublin team and Mayo’s Sarah Rowe to name just a few.”

The 2017 Ladies’ and Men’s Senior All-Ireland Football Finals featured over 30 DCU students and graduates – does it change how you watch these events knowing that Bank of Ireland has been a factor in the success of some of Ireland’s top sport stars?

GH: “At Bank of Ireland, we are very proud of our partnership with DCU. Our motivation, as I said, is to attach ourselves to success and to join with a like-minded organisation like DCU that also wants to excel at everything it does…but what that success looks like today has far surpassed our expectations.

The current Dublin team could possibly be one of the greatest teams of all time and when you see that 16 of the current panel have come through the Sports Academy that tells you everything you need to know about its influence. With guys like John Small, Paul Flynn and Jonny Cooper forming a core part of the team, we are proud to play a part in helping to develop Ireland’s sporting elite. It is also great to see the influence of the Sports Academy on the ladies’ game with so many past DCU students and graduates represented on the Dublin and Mayo ladies’ panels too.”

Oracle- Supporting Our Local Community Through the DCU Access Programme 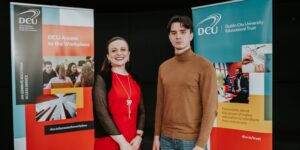 Alltech – Supporting Education for All